Being Not Doing at Audition Doctor 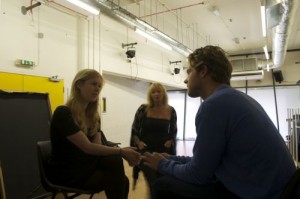 Ideastap recently published an article by Denis Lawson where he explored the false perception that an actor has to “perform” or “act” in order to affect an audience. He mentioned the instance when Billy Wilder was directing Jack Lemmon: “There was a particular take that Wilder had Lemmon do over and over again. “Too much,” Wilder would say, “Do it again.” Finally, Wilder said, “That’s it.” Lemmon replied, “But I’m not doing anything!” “Exactly,” said Wilder.

This is something that Audition Doctor focuses on; the ridding of the extraneous theatrics that get in the way of an honest portrayal of a character. Both professional actors and drama school candidates come to Audition Doctor to find a way of using both the words as well as themselves to create a fully fleshed human being. Audition Doctor’s success rate is high because in encouraging her students to play to their inherent unique strengths, what is shown to an audition panel is less of a “performance” and a more natural and unstilted rendering.

Textual analysis is essential, however, it is often seen as a way of creating a character by the building up of information from the writing layer by layer. Conversely, Lawson argues that the words should prompt the peeling away of layers and it is the act of stripping back which makes for an authentic performance.

Lawson says that while “it’s part of an actor’s equipment to be able to transform ourselves from part to part. Changing our appearance, altering our movement, our body language. But what can be equally challenging is nothing: just to be you. To have the confidence to work in front of an audience or in front of a camera and not do but be: peel back the layers to reveal yourself, and, through the sheer force of your concentration, to take the audience on a journey while appearing to be doing nothing. That takes nerve and confidence. The camera certainly loves it, but take that ability back on to the stage and it can be very powerful. I certainly feel now that if I’m straining and pushing for something, it’s wrong.”

Audition Doctor sessions encourage you to realise that less is more. However, this doesn’t mean that less work is done on the text. The confidence that results from intense textual exploration means that your performance can be informed and nuanced without having to resort to the artificiality that comes from “acting”.

Audition Doctor continues to be in high demand because aside from the practicalities of preparing for an audition, such as working on language and exploring a character’s intentions, Tilly encourages each of her students to realise what Lawson failed to realise early on in his career – that “the most potent weapon we have at our disposal as actors is ourselves.”