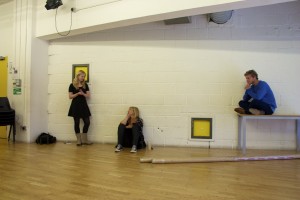 Vulnerability is a quality highly prized by actors. Playing a role truthfully requires the ability to empathise and a willingness to unselfconsciously open yourself up, which inevitably exposes you to judgement. This can be daunting, especially for those who are applying to drama school and have had little experience of doing so.

In The Stage, Mark Rylance said: “In my experience, in rehearsal rooms and looking at plays, this is the point of the mask of theatre, as Joan Littlewood once said. It enables you to share something really vulnerable. If you’re not using the mask of pretending to be someone else to share something vulnerable, what’s the point of the mask? This is where we can look at things that might really overwhelm us in life.”

Audition Doctor sessions are in demand because students are encouraged to be vulnerable and it’s rare to find an environment where you feel at ease enough to overstep your own limits.

Rylance spoke about his tenure at the Globe and about why some shows worked some nights and others not: “I realised it was something to do with being honest. You’ve got to delve for something honest and real that at least seems spontaneous, and hopefully is spontaneous, to capture them.”

Students who come to Audition Doctor sessions can attest that honesty and spontaneity are the two qualities – alongside vulnerability – that are fostered.

Aside from drama school students, professional actors make up a substantial proportion of Audition Doctor’s students. Of these, many are actors who have done a lot of film and TV work and who want to re-engage with theatre.

Rylance said: “[In film], the actor is not the storyteller; you just need to be as real and there as the chairs, and they’ll edit it. I’m going to be doing a lot of fronting for the Spielberg film soon – hours and hours of selling it, and I can talk about the process of enjoying playing it, but I’ve not even seen it yet. And when I do see it, it is no more mine than [it is] the camera operators or the grips.” In the theatre, by contrast, it is up to the actor to claim ownership.”

In a profession which is famed for its instability, attending sessions such as Audition Doctor is also an act of taking control of your career.

Rylance went onto talk about the difficulties of keeping lines you’ve said countless times before as original and fresh as the first time you spoke them: “Repetition is a big problem in the theatre – in my time, there was no training for it, and it is hard to give you the experience of doing more than five shows in a row at drama school. But there are things you can do to keep refreshing yourself, just simple things like coming out of your head and into your senses. If you’re onstage and stuck, come out of your mind that is causing you difficulties and think about what it smells like, looks like and sounds like, and get into the present moment.”

Getting out of your head is what Audition Doctor excels at and with playwrights such as Shakespeare, it’s easy to get caught up on the difficulties of the language rather than playing the emotion that the language is seeking to convey. Audition Doctor refreshes how you approach a text and liberates you from any obstacles that are preventing you from being vulnerable and genuine in your performance.