Grasping the Mechanics of Your Character at Audition Doctor 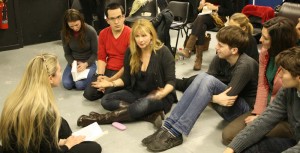 Last week, the Independent featured an article about Benedict Cumberbatch’s upcoming Barbican production of Hamlet. While it acknowledged that “Hamlet stands at the pinnacle of the actor’s art for its emotional and intellectual range”, it focused largely on the 1,480 lines that Cumberbatch will have to commit to memory.

Michael Pennington said: “It is the question that everyone asks at a party. It defines the job; it’s the bare necessity. But it’s still the thing that amazes other people.”

Whichever method they chose, all came to the consensus that “the key to mastering lines is not to treat them as lines, but as the ingredients of a character and a story. Grasp the total meaning, and the words will swiftly follow. For Michael Pennington, “You come to know the character that much better. It’s like the engineering of a car: you get to see what goes on under the bonnet. It’s a matter of cosying up the author – you see how they do it, and you develop a feeling for the music of the language”.

Audition Doctor lessons are about getting into the mechanics of the text and to cultivate the linguistic and emotional confidence that comes with spending time living your character. Many Audition Doctor students initially come to Tilly for help with Shakespeare because initially they find it difficult to get to a place where they feel like they are using the language effectively to communicate their character’s intentions.

This week, West End Producer commented on his blog: “One mistake that many new performers make is trying too hard to ‘stand out’ and ‘be different’ so they’re remembered in an audition. Chances are when you do this you stick out for all the wrong reasons, namely for being over the top, desperate, and unnecessary – which is exactly how you don’t want to appear.”

Audition Doctor students have found that sessions have resulted in the right kind of attention at auditions; the work undertaken at Audition Doctor is all about furthering your understanding of the role you are playing, as opposed to yourself.

Bryan Cranston advised young actors: “Know what your job is. About eighteen years ago I had this cognition that I was going into auditions trying to get a job and that simply wasn’t what I was doing. It wasn’t what I was supposed to be doing. An actor is supposed to create a compelling, interesting character that serves the text, you present it in the environment where you audition and then you walk away and that’s it….There’s power in that and there’s confidence in that. Everything else is out of your control.”

Audition Doctor gives students the peace of mind of knowing that they have done all they can to do their job well. Those who come regularly have also noticed that they land jobs simply because the lessons have enabled them to continue their training.

As West End Producer said: “Work leads to work, it really does. That awkward person who directs you in a profit-share show at the Union could one day be running the National Theatre. You never know. And by doing work, you will be surrounded by other actors and meet other creatives – and that’s how you find out about what’s going on and who is casting what, etc.”

The stress on all actors, regardless of whether you are playing Hamlet, is significant and as the Independent article rightly stated: “Every night, [an audience] expects art, practice, training, teamwork and trust to fuse seamlessly into a note-perfect or line-perfect rendition.”

Audition Doctor is popular with professional actors because regular practice and exploration in the sessions takes a large amount of the pressure off.