Deconstructing the Text at Audition Doctor 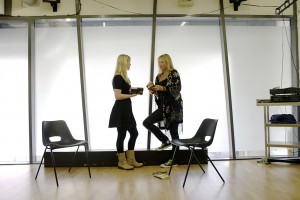 A recent interview with the cast members of the upcoming production of Mamet’s American Buffalo revealed the intensive and challenging nature of the rehearsal process. Director, Daniel Evans, and actors (John Goodman, Damien Lewis and Tom Sturridge) all admit that the play is one that requires “forensic detective work. Because Mamet writes so elliptically. He says himself that his characters never actually say what they mean, but they always try to say that which they think will make the other person give them what they want. It’s all hidden…It’s an onion to peel. It has layers and layers.”

Audition Doctor’s success resides in the detailed process that students experience – that of close examination of the character’s actions, the intentions of other characters in the play and understanding the motivation behind every sentence. Such depth of research means Audition Doctor students become confident moving within the linguistic complexities of writers such as Shakespeare and Mamet.

Lewis said: “I think most people would leap at the chance to be in one of his plays, because the muscularity and the musicality of the dialogue can be such great fun – but it’s also very dense, so it’s not easy, either.”

Professional actors and drama school applicants have found Audition Doctor indispensable precisely because Tilly ensures complex dialogue becomes far less of a hurdle. Instead difficult speeches are used to push their own capabilities – they force an actor to bypass the obvious and the facile and plumb the depths of their own intellectual and emotional world. Chris Thorpe wrote in the Guardian of how “Theatre acts as a national laboratory for thinking about how we think and how we are and what we are”. Actors who attend Audition Doctor routinely land jobs because audition panels sense that their artistic choices contribute to this idea.

Goodman said: “It’s utterly terrifying. But putting a play on still has that very romantic connotation for me. It’s what I grew up doing, I went to drama school to learn how to get better at it, and all my ambitions lay in theatre. I took a turn – a couple of turns – and went off and did a lot of interesting and wonderful things that satisfied and stimulated me. But just being in a rehearsal room with guys, the messy nature of creeping towards an understanding of a play, then getting up out of the trenches together and crawling across no-man’s-land to the other side, hopefully roughly together… there’s something very romantic in that to me. You have to bring a level of trust, and just assume that trust will not be betrayed.”

The atmosphere at Audition Doctor is characterised by trust, especially the safe and encouraging space that each session affords. Students routinely find it an encouraging environment to road test difficult parts and speeches.

The most successful of Audition Doctor’s students are those who have indefatigably persisted in expanding the speeches that they have worked on, thereby improving their craft. This echoes Harry Shearer’s most recent advice on the BAFTA website to would-be actors: “Talent is good, luck is better but nothing beats sheer brute persistence.”