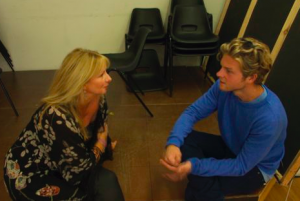 Last Sunday Mark Rylance spoke on Desert Island Discs about how “acting is a mixture of reaching out to people, which I would call a kind of electric thing, you have to stir and engage their imagination at times and at other times you have to be more like a magnet and draw them towards you. It’s really about hiding and revealing.”

Professional as well as aspiring actors have found Audition Doctor to be vital in the quest for achieving an equilibrium between these two seemingly contradictory principles. Although difficult to achieve, its purpose is simple – as Shane Zaza (currently in Behind the Beautiful Forevers at the National) put it recently – to “say the words and make it seem real. Make it sound like it’s not part of the script and that what you are doing is the truth.” In other words, clarity of emotion and thought.

Many students come to Audition Doctor because of their fear of Shakespeare – initially speeches are seemingly opaque and incommunicable. Even Olivia Colman admitted a “sense of inadequacy” when it came to Shakespeare: “I find Shakespeare terrifying. When Simon Russell Beale does a speech I understand every word of it, but if I did the same speech people would be going ‘Huh? What?’”

It’s therefore gratifying to discover that Simon Russell Beale puts comprehensibility above all else. In an article in the Guardian this week, he said: “You can do what you like with [the text] –  as long as you make coherent, emotional sense…I see absolutely no problem in throwing Shakespeare around”. The purpose of any play is to affect an audience, the reason why Shakespeare is still routinely performed is because the trials and experiences that the characters face are still recognisable to audiences today. Audition Doctor sessions make you realise that Shakespearean language is actually the actor’s greatest tool in “[making] these great literary dramas real and contemporary”.

In Audition Doctor sessions, nothing is immutable. Students realise session by session that Shakespeare speeches that initially started off being performed stiltedly and dispassionately cease being these untouchable museum pieces. Instead they breathe and come alive and fulfil their original intention of eliciting a real and true response from their audience.

The freedom to experiment that characterises Audition Doctor’s method of working reflects the attitudes of many established theatre practitioners. Deborah Warner encouraged actors and directors to “Do whatever you want … with the texts … You must cut to create new work.”

Rylance mentioned that “You must act exactly the same on stage as in front of the camera in terms of whether your emotions are truly felt, whether you are thinking things through and discovering things.” While there are variable technicalities that have to be obeyed when acting in different mediums, the authenticity of intention and feeling behind each line is a constant.

Mastering this takes an inordinate amount of learning and practice. There are places other than drama school, such as Audition Doctor, where this is achievable. However, many of Audition Doctor’s students are professional actors who have been to drama school and use Audition Doctor to continue to expand their abilities. Training at an accredited drama school is still viewed by those in the industry as the safest option.

In yesterday’s Guardian, Rebecca Atkinson-Lorde wrote: “The industry is competitive and, because of the cultural devaluation of vocational training for the majority of kids who want to work in theatre, the best way to build the skills and contacts you need is by training at a good drama school…” which is why Audition Doctor continues to be increasingly needed by drama school applicants and professionals alike.

Preparation is the primary reason why both professional actors and drama school applicants come to Audition Doctor. Preparation is also the topic that journalists love to question actors about. Many avoid discussing how they prepare for a part with one interview with Olivia Colman stating: “Colman doesn’t like talking about acting. She bats away my questions awkwardly with comments like, “It’s not very technical” or “I just pretend I’m in that situation”. It’s as if she finds the conversation pretentious and embarrassing.”  However much actors avoid talking about preparing, there is never any denial over its importance in the successful creation of a role. With talk by actors such as Judi Dench about the decline of repertory theatre, places such as Audition Doctor have become alternative yet integral spaces in which to rehearse, prepare, fail, and as the Beckett saying goes, fail better.

Aside from professional actors, a significant proportion of Audition Doctor’s students are those applying for drama school. BBC News this week ran an article that discussed the importance of such establishments in a performer’s development: “One element is not disputed: winning a place at drama school is key. That is where you gain experience, find an agent and make industry contacts. But the competition for places is fierce.” The article went onto examine how attending classes before auditions for drama school, such as those offered at Audition Doctor, often gave students an undeniable edge.

In response to the question “Do lessons stand you in good stead in an application for drama schools like Central, Rada and Lamda? Florence Hall, a student representative on the audition panel at Drama Centre replied: ”It’s not that they wouldn’t consider someone who hadn’t had any experience before, if they came in and clearly had raw talent, but you do have to look like you’re going to be able to respond to training which I think doing classes helps you to do. You learn to not be embarrassed to try things out.”

The cause of Audition Doctor’s students’ success in auditions lies in the judgement-free atmosphere that Tilly fosters. Consequently, this results in an unselfconscious and authentic performance. However, the students that get parts and places at drama school are those who prepare for Audition Doctor sessions themselves. The more preparation that is done outside of the session means that there is more to experiment and play around with.

Speaking of preparing for her recent role as P. L. Travers on the BAFTA website, Emma Thompson said: “There was so much information on this woman so I ingested as much information as I could over a period of six months; listened to everything, watched everything, read everything, then the trick is to let go of all of that information because you’ve got to trick your psyche into thinking that it’s someone else and you can’t do that by being conscious of being that person. So it’s a very odd magic trick. It’s more like a magician’s trick than anything else.”

The reason why actors are sometimes unwilling to speak of the preparation involved in forming a character is undoubtedly because there is some involvement of inarticulable alchemy that Thompson speaks of, and any effort to explain it may come across affected and pompous. However, many find that it is often at Audition Doctor that this is experienced, which is why students find Audition Doctor an incalculable investment.