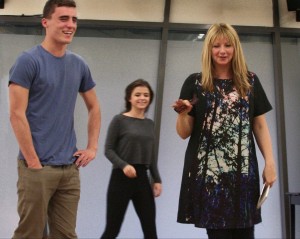 This week, Lyn Gardner asked readers: “Who has commissioned or co-produced some of the potentially most interesting new theatre that is taking place over the next couple of weeks?”  The answer was drama schools. Increasingly, drama schools such as the Royal Welsh College of Music and Drama, Mountview Academy of Theatre Arts and East 15 are commissioning new writing to develop with their students.

Many cite the primary reason for going to drama school as being seen and subsequently signed by an agent. However, as Dave Bond of the RWCMD points out…”It [also] gets theatre and theatre writers and directors to connect with graduates, and sometimes they take those graduates with them as their careers progress.”

As Stephen Jameson of Mountview argues: “It’s a virtuous circle of creativity.” And as Christopher Haydon, artistic director of the Gate which is hosting the RWCMD shows, says: “It’s an exciting way of scoring lots of goals with less risk.”

Some prospective applicants to drama school worry about what Jameson calls “the certain marionette aspect to a traditional drama-school education for actors”. However, partnerships between drama schools and new writing proves that drama schools “recognise that [their students] are creative people and foster a progressive programme of work for graduating students that reflects the current developments in theatre in this country and gives them a real understanding of the devising and creative process”.

Many students who come out of drama school form their own theatre companies to ensure that they have a sense of creative autonomy in an industry beleaguered by cuts. Consequently, work – if offered at all – can be safe and devoid of risk. Only when the element of risk is involved can the work potentially be interesting. The devising process that drama schools now offer alongside new writing means that students are knowledgeable in how to create a successful piece of theatre outside the confines of drama school.

As Gardner says: “It’s all to the good, particularly at a time when drama schools seem to be increasingly turning out graduates whose eyes are fixed firmly upon TV and movies rather than the theatre. By putting significant amounts of money and time into new theatre work they are indicating to their graduates that theatre still matters and helping playwrights, theatres and companies to create challenging new work.”

When interviewed about the upcoming production of “A View from the Bridge”, Mark Strong commented on why he has decided to return to the theatre: ‘I wanted to get back into a room with a group of people – all bright, all committed – and talk about why we do this stuff, and how we do it,’ he says enthusiastically. ‘Because film doesn’t really demand that. You tend to learn your lines in isolation, you might go in and have a quick chat with the director, then you’re on camera. And you’re disconnected from the process, really. Whereas in a rehearsal room, you’re going over a text again and again – especially a text like this, which has survived for so long because it’s so good. And if our job is to shine a light on human nature, then you really get a chance over a number of weeks to do that, and then over a number of performances to show it. It’s such a privilege.’

Audition Doctor sessions are similar to the rehearsal room that Strong describes. The text is mined and relentlessly explored. This makes the entire process of auditioning feel organic – invaluable when in the midst of drama school auditions which can make students feel like just another number. The time usually spent at Audition Doctor is spread over a number of months. The interpretation that you present to the panel will by no means be the only one you will have explored with Tilly. Ultimately, this means that when you are redirected, you will have the confidence to present a whole range of interpretations that are rooted in truth.