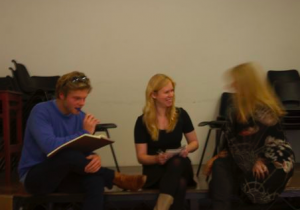 One of the many reasons why professional actors and drama school applicants come to Audition Doctor is Shakespeare.  Harry Mount wrote in the Telegraph of the ofttimes default tendency to “treat Shakespeare with too much reverence, as an English literature exam question…” Shakespeare’s plays have become more associated with monotonous readings in English lessons at school than where he intended them to be – acted out on stage.

Mount went onto explain that Shakespeare’s unquestionable place in British culture has meant that “he has rightly become a mainstay of the academic world. [However,] that shouldn’t mean he should be confined to the classroom and the lecture hall. Shakespeare didn’t write for academics – or for the well-heeled, early 21st century theatre-going middle classes. He wrote for the rough and ready rank and file of Elizabethan London.”

Audition Doctor sessions don’t encourage the untouchable and venerational approach to Shakespeare. Instead, the Elizabethan language is tackled just as a contemporary speech would be.

This means that students at Audition Doctor avoid what Nick Hytner called “over-colouring”. He explained in the Guardian of the “overt musical poeticise which was very much what people wanted 30 or 40 years ago” going out of fashion.

“I believe that that poetic grace can come through and should come through, and we work on it, but it relies most importantly on people speaking it as if its how they think. If that happens, it’s comprehensible.”

Mount even cited Richard E. Grant’s Hamlet soliloquy in Withnail and I as an example of how Shakespeare’s language can be seamlessly and comprehensibly woven into modern day speech.

“The insertion of a Tudor speech into a film about late Sixties London seems entirely unstagey because Grant acts it so convincingly. He understands what the words mean, and communicates that understanding so expertly that the audience doesn’t have to strain to understand it.”

Hytner has admitted of Shakespeare productions that “The first five minutes is always tricky. But I think by 15 minutes in, most people have tuned in.” Audition Doctor’s indispensability to actors lies in the fact that students end up commanding the language so fully and using the writing to their utmost advantage that the audience is immediately drawn in. Initial auditions, especially for drama schools, are rarely longer than 15 minutes. There simply isn’t the luxury of time to allow the panel to ease into your performance.

The volume of drama school auditions mean that each candidate is given a very limited time slot. Audition Doctor sessions have given students the assurance that this isn’t wasted. The few minutes that you are given to impress your prospective future teachers can seem hugely intimidating.

Gemma Arterton recently spoke of how important her experience at drama school was in terms of launching her career.

“I didn’t come from a background where I knew anyone in the industry so I went to drama school and luckily here in the UK we have that opportunity that anyone from any background can apply to drama school. We have government funding to support students there so I auditioned…and then I got into RADA…I suppose it gives you a platform which is taken very seriously…and a lot of people come and see you when you’re there…I got an agent…but it was all thanks to drama school.”

Audition Doctor immeasurably improves your chances of reaching this platform and consequently, of forging a sustained career in the industry.