Audition Doctor as a Learning Tool 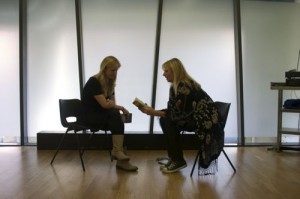 As a testament to the proliferation of learning tools for actors, The Stage have started to compile weekly lists of the best that are currently on offer. These range from apps that help you learn lines to books that offer advice and exercises.

Although written material and websites with video blogs can undoubtedly be useful means of furthering your development as an actor, they are still passive ways of learning about a practical and active profession. The reason why Audition Doctor is popular with both professional actors preparing for auditions and drama school applicants is that they understand that there is no comparison between reading a book on acting and physically getting up to play a scene.

Describing how she operates while on stage, Judi Dench said: “Although you and I can be playing a scene together, this ear here is not actually listening to you, it’s turned round like a cat’s and it’s listening to that person up there is coughing and this eye is also watching over there. It’s kind of a dichotomy.”

The skills required to achieve this kind of balancing act is something that cannot be reached using an app. It has to be practiced endlessly and diligently.

Harriet Walter advised: “Start from a humble point of view about your own knowledge. Be open to everything. It’s better to risk being a prat at drama school than in the outside world.” Students have realised that both Audition Doctor lessons and drama schools are concentrated pockets of time where they have the freedom to take risks. The rules of probability state that risk will involve a sizeable amount of failure. The advantage about doing this at Audition Doctor is that decisions that don’t serve the character or scene are scrapped and you have the opportunity, under Tilly’s guidance, to make better choices.

Talking of the nature of film versus theatre, Judi Dench said: “There are a thousand ways to do a scene, it’s agony to me that only one way is chosen. So that one way is kind of in formaldehyde…that’s why the theatre is so alive and spontaneous. Tonight I will do something that I didn’t do last night; I may do it worse but I may do it better.”

The reason why students normally have regular Audition Doctor sessions is that they know that from lesson to lesson, Tilly’s advice can give their performance an added dimension that they previously hadn’t thought of. No performance is ever set in stone. Furthermore, the experimental nature of the sessions mean that actors enter auditions with the advantage of having unusual choices in their arsenal while not stubbornly clinging to them. The unselfconscious willingness to experiment is something that Audition Doctor fosters. Audition Doctor’s success rate, in terms of drama school places and professional jobs landed, is proof that listening to a podcast is poles apart from a session with Tilly.