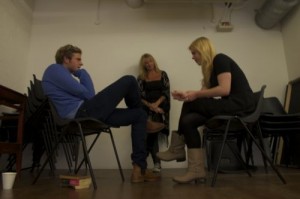 At the Cheltenham Literary Festival, The Times reported Judi Dench disagreeing with the  commonplace practice of understudies playing the roles of leading stage actors in matinees. She credited her training at drama school as the thing that equipped her with the stamina: “That doesn’t faze me at all – eight performances a week, I know it’s rather fashionable now to get someone else to do two performances but that’s not the way I was trained.”

However, she also recently mentioned the difficulty for actors without significant private backing to receive professional training. Earlier this year, The Times carried out research in which “a study of 100 British actors to have been nominated for Bafta or Olivier awards in the past decade showed that state-educated actors outnumbered their privately schooled peers until 1957, when the trend reversed. Even before that turning point, products of a state education were still at a disadvantage as they represent more than 93 per cent of the population.”

With drama schools now charging £9,000 in fees and complaints about the dearth of working-class stories portrayed on television, acting is understandably seen as being a profession monopolised by the wealthy. Furthermore, Dench lamented the fact that “there aren’t [repertory theatres] where you get to learn about how other actors do it. Where do you go to learn, and to make mistakes?” The disintegration of the repertory system has meant that drama school has increased in importance as a space where young actors can learn and make mistakes.

Dench went onto warn that “it [is wrong to assume that good actors will rise to the top. It doesn’t hold that the actors who are good actors are in the jobs. It’s if you’re lucky, you’ve got the job”, reinforcing the idea that getting a place at drama school has become even more important.

However, as Jake Gyllenhaal said on the On Acting blog of the Bafta website: “Education is essential…it doesn’t mean you have to go out and get it from an institution but educating yourself is the most important thing, otherwise you’re making blind choices that you’re not sure about.”

Audition Doctor has become an alternative place for both professional and aspiring actors to educate themselves with professional guidance. Gyllenhaal stated that what he looked for in a role wasn’t “about a genre or even about a specific character, it’s if I feel that there’s an honesty and a sort of beating heart that exists underneath the material…it’s the honesty and truth between characters.”

It is this that Audition Doctor focuses on: the creation of a truthful and three-dimensional human being. Audition Doctor’s students come regularly because unlocking the beating heart that is underneath the material that Gyllenhaal speaks of, takes time and a commitment to both failure and experimentation.

Furthermore, Audition Doctor students understand what Gyllenhaal means when he said: “For a long time I was looking for a sense of resolution at the end of a movie or a scene, feeling like as Chris Cooper said to me once “Never having regrets”, but that’s impossible, there is no resolve. You never fully get there and it’s a constant search.”