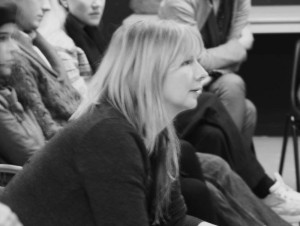 The pianist, Sara Solovich, wrote in the Guardian about her journey overcoming stage fright and explored the nature of fear that lies in most performers. While a certain amount of fear is healthy, many students come to Audition Doctor to control the nerves that sometimes sabotage an otherwise excellent performance.

Solovich documented a Harvard Business School study, which “found that people who view their anxiety as excitement actually perform better on all kinds of tasks, from public speaking to karaoke singing.”

While Audition Doctor sessions focus on character development and hitting an emotional honesty that rings true to an audience, it is through this rigorous preparation that students have found that their perception of fear changes. They become emboldened to make more experimental choices when rehearsing and become less worried about getting things “right”. Similarly to what Solovich writes, sessions are “about rebranding your fear”.

Solovich states: “Aspiring to perfection in a live performance is a dead end, and stage fright – or stage excitement – is like an untamed horse: we have to try to harness it, let it out, pull it back and let it out again so that we can ride the energy in our performance.”

Professional actors and drama school applicants attend Audition Doctor sessions not because they want to deliver a perfect performance which has associations with rigidity and a lack of imagination, but because they want to be fearless in their playing. It is this unselfconscious trial and error that is the springboard for an original and truthful performance.

Audition Doctor is in continued high demand because actors understand the absolute necessity of preparation. While Katherine Parkinson declared in the Guardian that she thought comedy was so instinctive to an actor that “you don’t have to do any homework”, she did say: “I think with drama everyone has an emotional truth and it’s about accessing it. Some actors can access it more easily but you have to put the work in. You can’t do a play about someone with depression, for example, without thinking that through. It’s not to say comedy is easier – I think the talent is rarer – but I find it easier. For me the most satisfying thing is to do both in the same play or programme, which is frustratingly rare.”

Accessing the emotional truth as well as harnessing nerves to the actor’s advantage is another reason for Audition Doctor’s popularity. Places where this is both available and affordable are few and far between.

When Parkinson was asked who her heroes were, she said: “People like Lesley Sharp, Lesley Manville. Anyone called Lesley. Anna Chancellor and Imelda Staunton obviously. The thing I admire about all those actresses is the way that they do lots of theatre. So to see Helen McCrory in Medea and then on TV in Peaky Blinders and managing the rigorous demands of different media as well as different characters, that’s what excites me.”

Audition Doctor sessions are about exercising practical as well as artistic muscles. This means that students always feel confident and prepared to deliver daring and authentic performances regardless of which medium the part is for.