Originality and Failure at Audition Doctor 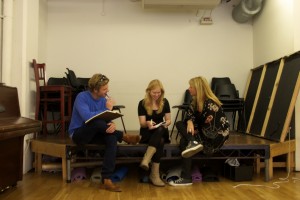 In The Stage, Judi Dench spoke about her constant “fear of everything” as an actor – fear “ of not fitting into that slot, of not fulfilling that piece you are asked to do. I get more frightened [the more I do]. The more you do, the more frightening it is anyway as you are much more aware.”

Fear plays an undeniable role for most during auditions, however, at Audition Doctor, much of that fear is alleviated through the progressive confidence that each student gains with each session. Both professional actors and drama school applicants have found that failure is not discouraged at Audition Doctor.

This echoes Colin Farrell’s interview on the BAFTA website where he insisted: “You have to be allowed to fail as an actor because it’s very easy to play it safe”. Like drama school, Audition Doctor sessions are where you are encouraged to take risks and feel safe in doing so.

Audition Doctor sessions involve both discussion as well as performance. The choice of speech always takes perhaps longer than expected. However, Geoffery Colman, Head of Acting at the Central School of Speech and Drama, recently wrote in The Actor’s Handbook:

“The choice of speech preoccupies many candidates, who unearth an astounding range of two minute extracts – often material inappropriately sourced online and disallowing any creative placement of their own heart and mind. And oh, how audition candidates obsesses about contrasting this, that or the other! Just select an extract from a play that is simple, clear, unfussy and – most important of all – one that allows you to enter its world without a fight (and most certainly without the need to show that you are entering it). People bring much worked-upon accents, props, shouts, peculiar moves, glances and screams as though volume alone will do the deal. This should be avoided.”

Dancy mentioned: “I suppose I’m looking to be intrigued in some way. Maybe have a question raised that isn’t immediately answered for me. It’s not often necessarily the case that you realise that as you’re reading something. It might be that over the following few days it’s percolating.”

Auditioning, particularly for drama schools, is a long process and you can live with the speeches for up to 6 months. The speeches chosen have to be simultaneously comfortable yet demanding – both emotionally and intellectually. Audition Doctor sessions give you the time and space to fully inhabit the character and really make it your own.

This originality and individuality is what drama schools are looking for because as Dench noted in the same interview: “Don’t let’s fool ourselves – don’t let’s stop for a minute to not remember that right here at my shoulder is someone standing, and behind her is someone else and someone else.”