Debate and Enquiry at Audition Doctor 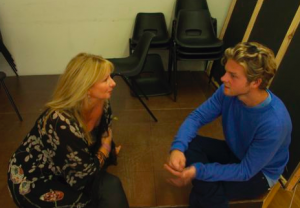 Phoebe Waller-Bridge wrote in the Stage of the pressure young actors feel to unquestioningly take directors’ decisions as gospel.

“For years, the gratitude I felt for anyone who had given me an actual job, coupled with the embarrassment of disagreeing with them, meant that I simply nodded eagerly when I was handed an abhorrent costume or told to make a ludicrous entrance. I didn’t say anything because it’s not my job. I am ‘just an actor’.

It has taken me too long to learn that if you’re an actor and you disagree with your director, you are allowed to pipe up.…don’t be afraid to challenge things politely. Our job is about storytelling and if you feel like you’re not telling the story in the best way possible then crack on and politely shout about it.”

The originality of interpretation that results from an Audition Doctor session often rests on the creative debate that arises between a student and Tilly. Questioning and experimentation are viewed as essential parts of developing a character. Testing different approaches to a scene and contesting why some of them fail to work as well as others is strongly encouraged. Consequently the work that students end up performing at auditions is always wholly their own. Furthermore, during the discussions that sometimes arise after auditions, Audition Doctor students are unfailingly articulate about why they chose to stick to certain decisions and why they abandoned others.

Audition Doctor’s popularity with professional actors and drama school candidates rests on the experimental nature of the sessions. There is no mono-methodical approach, especially when it comes to Shakespeare. This is an advantage for students because style of delivery is in constant flux. The current trend for performing Shakespeare naturalistically is constantly being challenged.

“I feel like it’s your responsibility as an artist to stop thinking naturalistically…I think that’s the main problem. We think realism and that trips us up especially when it comes to Shakespeare. It’s not realism, it’s not naturalism. It’s a metaphor, the whole thing is metaphor.”

The reason for Audition Doctor’s popularity with trained actors is also down to the fact that drama schools only teach their students so much. As Tom Hardy said in The Times:

“When you go to drama school, you get a certain amount of camera classes but nothing really prepares you for: ‘You’ll now be working with Steven Spielberg’s company and you’ve got to be on this mark’,” he said. “And you go: ‘What’s a mark?’ Though I didn’t say that. I said: ‘Yeah, course I’ll be on my mark.’ Until somebody said: ‘You’re not hitting your mark […] it’s this thing on the floor.’

“You never admit you don’t know something, do you? Not when you start out, that’s a sign of weakness. Only that’s what keeps you stupid. Make mistakes: that’s when you f***ing learn.”

Audition Doctor is the place where students make mistakes, get better and continue to challenge and develop the tools that drama school equipped them with.